remember that poll i posted a couple weeks ago – asking who runs? i am going to give myself a “B+” grade for it as my very first attempt 🙂

The results surprised me. I am a little shocked to see that no one enjoys running as much as I do! What?! I cannot possibly be the only one… Maybe I just need to convert some people. On the other hand, 6 of my respondents chose “Me? Yeah right. I can’t run. (Although some part of me wants to… hmmm)”. Cool – you’re thinking about it! 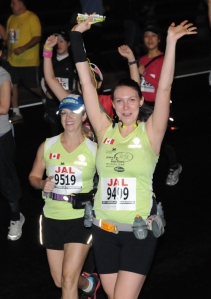 If some part of you is considering running, what’s stopping you? Is it the myth that to start running you must be fast? Is it the myth that only “athletic people” can run? Are you overwhelmed and unsure where to start? Here are some tips from little ol’ me (the newbie-ish runner who has no right to be handing out advice…):

You really just need a pair of shoes and clothes that are comfortable (and warm during this time of year) to run in. Don’t go spend $200 on a new running wardrobe & another $150 on a fancy pair of shoes. Chances are you’ll be running less than 15km a week (unless you happen to have the natural running gene and find it really easy and I hate you), so a “decent” pair of runners will do. I didn’t start getting the fancy gear until I graduated from “trying to run” to “loving to run”. I would rather spend money on a new adidas technical shirt than a new pair of dress shoes!

When you start, go by feel. In general, you want to try to run at a pace that you can carry a conversation at. Don’t get me wrong, you should need an extra breath here and there, but you shouldn’t be running so fast that you <HUFF> have to <HUFF> take a <HUFF> breath <HUFF> every <HUFF> word. You should be able to <HUFF> comfortably chat with your buddy <HUFF>.

Stop judging the fact that you can’t run as fast  or as far as Joe Blow over there. You know, the dude that passes you in the blink of an eye on the public pathway. That’s Joe Blow. This is you. I’ve touted this over and over – running is personal. No one else’s running progress matters. I’ve passed people on the pathway who look like they’re shuffling, actually – I have run at a pace that was essentially a “shuffle”.  We all start somewhere. Joe Blow wasn’t always that fast and he couldn’t always run that far.

The only way running will ever become easier for you, is if you consistently do it. If you do get out there and pound the pavement, but only do so once or twice a week or less, it will continue to be a little tough, making it a little bit de-motivating. Keep it up twice a week or more (preferably 3x a week), and after 2-3 weeks, it will start to get easier.

Don’t compare yourself to others. All that matters is that you go out there, and git ‘er done. Pushing yourself is not at all about going as far as Suzy Cooper (House reference for Hugh Laurie fans) or as fast as Ryan Hall (google him). It’s about knowing that you either stepped it up a notch to push yourself and make improvements, or knowing that you packed it in early or took it easy because your body told ya “Hey, I need a sec”. It’s about proving to yourself that YOU can do it… and waking up one morning and realizing you’re doing something you never even fathomed you had in you.

It’s not that bad, really, for the most part. Unless it’s -20 and windy, the cold is easy to deal with… Especially once you get going and start to really warm up. Also, wear mitts and a hat. If you do get too warm, they’re not exactly heavy items, so just carry them.

If ice is really bad, or you’re overly paranoid, then hit the treadmill. Sometimes called the Dreadmill, this is a perfectly fine alternative – just be aware that it is easier than running on pavement (it does a little bit of the work for ya). To overcome boredom, split up your run… Do 10mins on the dreadmill, then do something else for a little bit – anything – and then continue and do another 10min on the dreadmill. Or 5mins each. Or 15min each. Whatever time, just split it up.

Aaaand… a couple resources from one of my fav runners I follow, Jason Fitzgerald (a 2:39 marathoner!)